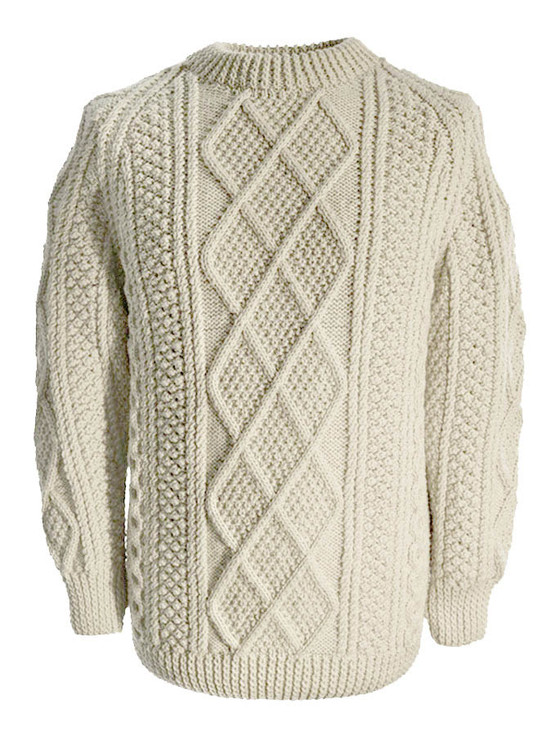 Nolan is the English version of the Gaelic Ó Nualláin, which comes from the word “nual” meaning ‘famous’ or ‘noble’. The clan was originally based in Co. Carlow, where in ancient times they were Princes of the Barony of Forth, or Foharta. Some branches of the clan migrated from this area to counties Mayo and Galway and became significant landowners in the area. Today, the name is the fortieth most numerous surname in Ireland, and is strongest in the eastern province of Leinster.

The hand knit Nolan sweater has a tree of life filled diamond as the central pattern, flanked by an unusual honeycomb stitch, trellis and tree of life on either side. In addition, the waistband is comprised of intricate tree of life patterns. The tree of life represents family unity, the honeycomb symbolises work and the trellis is symbolic of the walled fields of the Aran Islands. This beautiful Aran sweater has been hand knitted in the traditional báinín (pronounced ‘baw neen’) colour, the natural white of the wool. It comes to you complete with a clan history and crest. It is made of 100% pure new wool, is water repellent and breathable. It has been hand crafted in the traditional Irish style, and, with care, will last a lifetime.