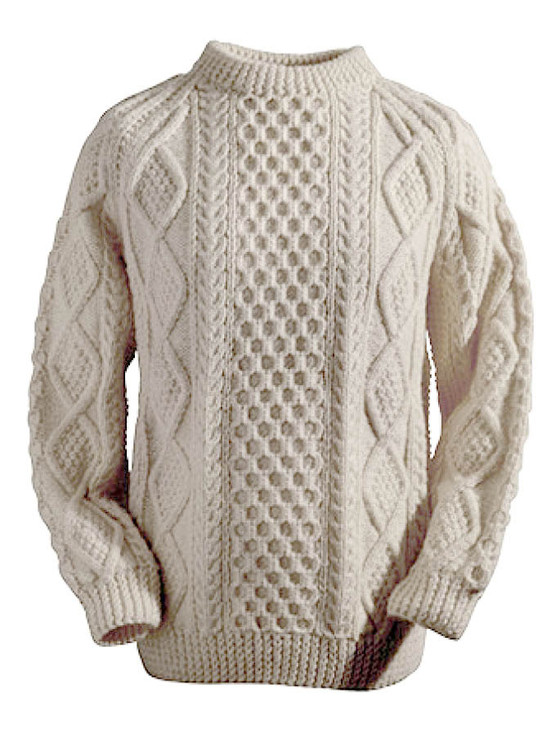 Moran is the English version of two distinct Gaelic surnames; Ó Móráin, from the Gaelic “mór” meaning ‘big’, and Ó Mughráin, whose meaning remains unclear. The Ó Móráin was a sept from Ballina in north Co. Mayo. The Ó Mughráin were part of the Uí Máine tribal grouping, and were based around Criffon in Co. Galway and Balintubber in north Co. Roscommon. The name ranks today as fifty sixth most common in Ireland, and remains strongest in its original homeland of the western province of Connacht.

The hand knit Moran sweater has a honeycomb central panel, flanked by cables, link and a moss-filled diamond stitch on either side. The honeycomb represents work, the cable is symbolic of a wish for good luck, the link symbolises the unbroken chain between the Irish who emigrate and those who remain at home, and the diamonds represent a wish for wealth. This beautiful Aran sweater has been hand knitted in the traditional báinín (pronounced ‘baw neen’) colour, the natural white of the wool. It comes to you complete with a clan history and crest. It is made of 100% pure new wool, is water repellent and breathable. It has been hand crafted in the traditional Irish style, and, with care, will last a lifetime.