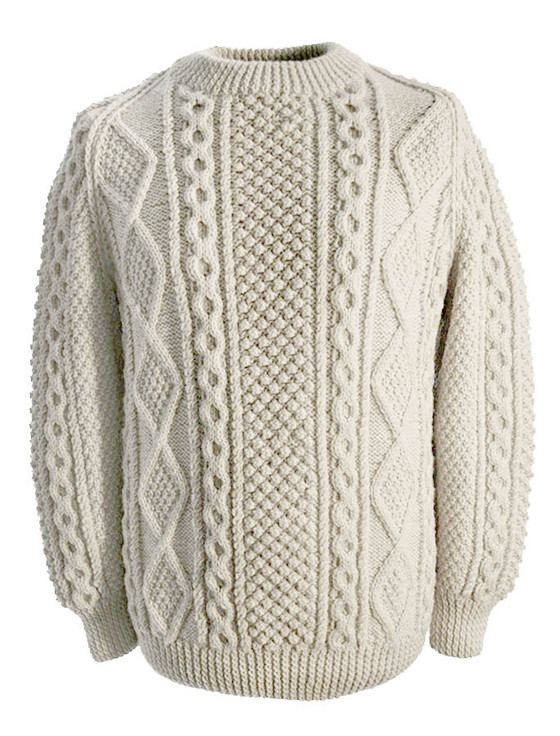 The name Mc Carthy comes from the Gaelic Mac Cárthaigh from the word “Cárthach” meaning loving. The original bearer of the name was Carthach, King of Cashel in the eleventh century. The Mc Carthys ruled as Princes of Desmond, covering the modern areas of counties Cork and Kerry, from the 12th to the 16th century. Today the name is the thirteenth most numerous in Ireland, and is strongest in the southern province of Munster - find out even more about the McCarthy name history in Ireland).

The handknit McCarthy Clan sweater has a blackberry centre stitch panel, it is flanked by 1 single row of honeycomb and outside of this vertical rows of moss filled diamonds. The blackberry stitch represents the holy trinity, honeycomb for work (the industriousness of the bees) and the diamonds are a wish for wealth. This beautiful Aran sweater has been hand knitted in the traditional báinín (pronounced ‘baw neen’) colour, the natural white of the wool. It comes to you complete with a clan history and crest. It is made of 100% pure new wool, is water repellent and breathable. It has been hand crafted in the traditional Irish style, and, with care, will last a lifetime.