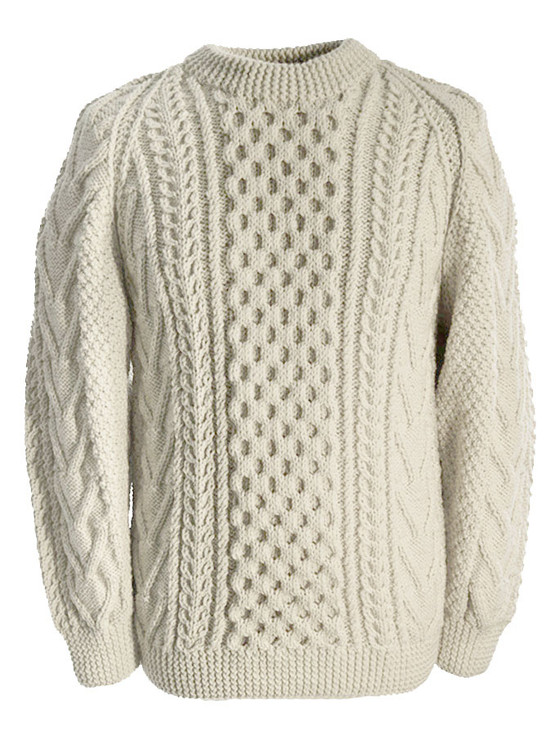 Lynch as it exists today in Ireland actually has two completely distinct origins. One is Norman, from the name de Lench. This clan established themselves in counties Meath and Galway, and became one of the ‘Tribes of Galway’. The second clan is of Gaelic origins, Ó Loingsigh, coming from the Gaelic ‘loingseach’ meaning seaman. This clan was spread across a number of areas including Co. Clare, Co. Limerick, Co. Sligo, Co. Cork, Co. Cavan, Co. Donegal, and also counties Antrim and Derry where they were chiefs of the old kingdom of Dál Riada. Today, the name is ranked as seventeenth most numerous in Ireland, being most numerous in Co. Westmeath and fourth most numerous in Co. Cavan (find out even more about the history of the Lynch name).

The hand knit Lynch sweater has a honeycomb centre panel, flanked by cable, link, and chevron stitches on either side. The honeycomb symbolises work, the cable represents a wish for good luck, and the link is symbolic of the unbroken chain between the Irish who emigrate and those who remain at home. This beautiful Aran sweater has been hand knitted in the traditional báinín (pronounced ‘baw neen’) colour, the natural white of the wool. It comes to you complete with a clan history and crest. It is made of 100% pure new wool, is water repellent and breathable. It has been hand crafted in the traditional Irish style, and, with care, will last a lifetime.