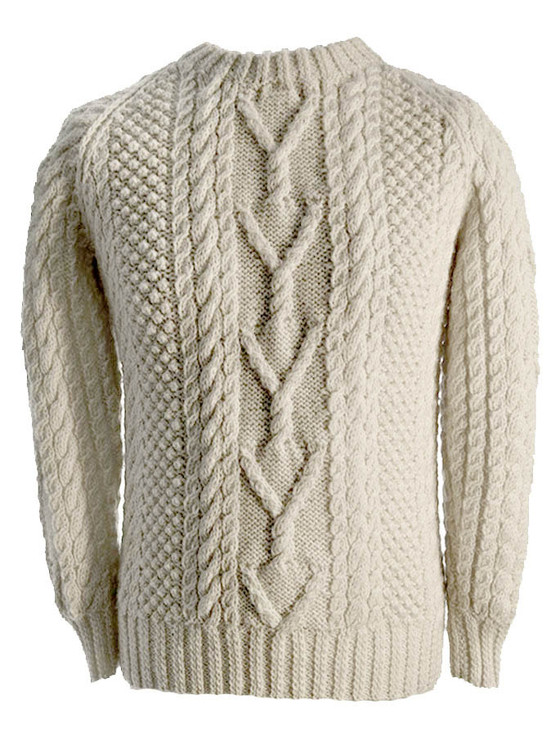 The Doghertys originated in Co. Donegal, and their name is one of the oldest hereditary surnames in Ireland today. They are descended from Niall of the Nine Hostages, King of Ireland in the fourth century. Their stronghold is Co. Donegal in the northern province of Ulster, where they were powerful chiefs until the execution of Cahir O’ Doherty in the seventeenth century. The name comes from the word “dochartach” which means ‘unlucky’ or ‘hurtful’. Doherty is the fifteenth most numerous in Ireland, and first and second most numerous respectively in counties Derry and Donegal (find out more about the heritage & history of the Doherty name).

The hand knit Doherty sweater has a chevron centre stitch, flanked by cable, rope and moss on either side. The cable stitch represents good luck, and moss stitch represents nature. This beautiful Aran sweater has been hand knitted in the traditional báinín (pronounced ‘baw neen’) colour, the natural white of the wool. It comes to you complete with a clan history and crest. It is made of 100% pure new wool, is water repellent and breathable. It has been hand crafted in the traditional Irish style, and, with care, will last a lifetime.